Should you File a Divisional, Continuation, or Continuation-in-Part before your Patent Issues?

Your patent claims are allowed. Your patent is going to issue soon. Congratulations!
Jeff Holman
|
Posted on
May 15, 2020
|

Your patent claims are allowed. Your patent is going to issue soon. Congratulations!

Make sure you don’t miss the opportunity to make an informed, strategic decision about whether to keep your patent options open by filing a new patent application and claiming priority to your allowed patent application while it is still pending.

In general, there are three types of follow-on patent application:

The main difference between a continuation and a divisional is that a divisional is required if you want to file claims on an invention that wasn’t elected in the earlier application where the examiner issued a restriction requirement. Otherwise, continuation and divisional applications are basically the same and require the claims in the new application to be supported by the original specification. You can’t add new material or scope beyond the original description.

In contrast, a continuation-in-part (CIP) application includes new material or scope (and might have a different set of inventors). Just understand that the new material or scope will not get the benefit of the priority date for the original description. You essentially end up with multiple priority dates, depending on what subject matter is recited in each claim relative to the old and new disclosures.

There are a lot of other rules about linking applications together, but this topic is focused on whether to file a new application when your existing application is allowed and ready to issue.

When considering an allowed patent application, here are five perspectives you should consider before you miss the chance to potentially get another application linked to the earliest priority date in the chain of patents.

One of the most common reasons to file a new patent application is to pursue claims with a broader scope. Examination of the claims in a patent application often lead to amendments that narrow the scope of what is protected. Sometimes a narrower scope is pursued purposefully to track a specific technology or get through the examination process faster. Other times the scope is changed to avoid prior art. Still other times the technology itself develops in a way that leads to gaps between the technology and the claims.

Regardless of the reason for the potential change in scope, carefully consider whether the claim scope of your allowed claims covers what you want it to cover, whether that’s your technology, a competitors technology roadmap, or something else. If there are other claims that you want to pursue with broader scope, then you should file a continuation application with the new claim scope.

Sometimes you want to add more detailed claims to the ones that were allowed. Normally this would be relatively easy during the examination of the earlier application. But in some instances the timing of adding new claims would interfere with the ongoing examination or require complex and costly procedures to get the new claims added, up to restarting examination from the beginning.

For about the same cost, and much less effort, you can pursue additional dependent claims in a new patent application, which can be streamlined through the use of a terminal disclaimer. This allows you to add more claims to cover your own technology or try to capture additional traction against the evolving technology of your competitors.

If you disclosed a lot of different embodiments, or even different inventive stand-alone components, then you might want to “break” your original application into separate patent applications. This is a relatively common approach for bootstrapping inventors and startups who want to preserve their right to protect multiple aspects of their new invention. Additionally, this approach is often used when an entire new system is developed, or envisioned, and the initial patent application is used to capture the overall system, while subsequent patent applications are used to protect individual components of the system.

The concept of infringement perspective is related to the subject matter you are claiming but is more focused on the potential types of infringers you might want to guard against. Your claims are written in “claim sets” with an independent claim and a group of dependent claims. Each claim set is likely (and hopefully) written with the perspective of a single infringer in mind.

For example, the type of claims that a manufacturer might infringe would be different from the types of claims an end user might infringe. For the manufacturer, you might be concerned with the manufacturing equipment or processes. But the end users wouldn’t infringe those claims. Rather, the end users would infringe a product claim or maybe even a method of using the product (instead of a method of making the product). Other infringers such as resellers, distributors, transporters, importers, OEM brands, and other direct and indirect competitors might require unique claim sets from different perspectives in order to protect against their unique relationship with your technology or invention.

While there is some coincidence in this approach, companies with sufficient budget and financial incentive to either protect their market share or monetize their patents against their competitors find it helpful to maintain the pendency of important patent families, even when the competitive target doesn’t exist, yet, and is only anticipated in the following 1-2 years.

ARE YOU READY TO TAKE ACTION?
‍
Get your LEGAL ROADMAP for Technology Ventures and Transactions
Align your IP STRATEGY with your Business Strategy
PROTECT your Technology and Brand
INTEGRATE our Team into your Team
Get your Invention DIY PATENT PENDING

Legal Disclaimer: This general information does not establish a legal relationship with any attorneys or law firm without a written and signed legal representation engagement agreement. 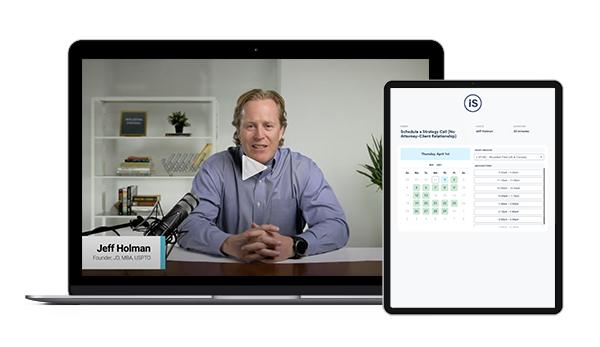 What are the Legal Implications of Giveaways?

Looking to do a Giveaway within your company? Don't know where to start? Read on to discover a great list to begin the process.

Can I use another Company's Logo in My Artwork?

Confused on the legality of using other's intellectual property in your creative work? Read on to see a real response to one of our clients.

Stuck trying to decide on which patent application to file? Sometimes the answer is: both!